Normal women buy things like chocolate or ice cream as a special treat for themselves now and then. Ultimately, I suppose, these things are relatively cheap, monetarily. Unusual fabrics are my sin, however. While they can be comparatively more expensive, they are tax deductible (business expense), often inspirational and generally less caloric.

I don’t know why, but I’ve never really played a lot with silk fabric before. Actually, that’s not true. I’ve rarely played with it because it’s bloody expensive. Around here, you pay $30 CDN a metre (that’s 39″ for you Imperial folks) for either Duppioni or Habotai silk, when you can get it. I’ve tried the Duppioni and love it for night skies. The sheen really adds a dimensionality and texture and the lines of the fabric fibres are just fine in a piece designed to convey a horizontal impression. The Habotai is harder to come by and is never on sale, but I got some for $12.98 due to a pricing error at a local shop. 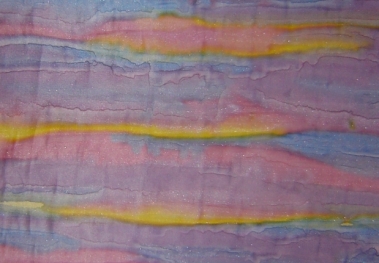 Using Pebeo Setacolor Transparent paints on Habotai silk, I’ve just achieved some of the most delicate and rich sunrises and sunsets I’ve ever painted (pictures don’t do justice here). I kid you not, the Setacolor paints are twice as vibrant on the silk as on cotton. Just incredible. I think I might be a convert. G&S Dye sells the silk for very reasonable prices, so I might just start using it more extensively.

Tips: use a fine brush and don’t dilute the paints too much. They spread more on silk than on cotton and dry faster (an added bonus). To get water, I used a thin brush and painted lots of thin strips that bled into each other. For the sunsets, I painted smaller areas on the silk than I would normally on cotton to allow for the bleeding and loaded the brush with less paint than normal as well.

Well worth the experiment. Wonder if the store has fixed the pricing error yet. If not, I might go back tomorrow…