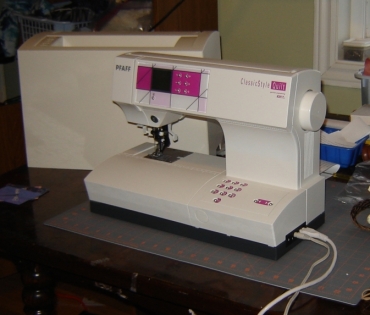 This is probably the closest I’ve ever come to buying myself a Christmas present. It’s mainly the timing of the purchase that makes it so, therefore I can absolve myself of the feelings of guilt that go with spending money on oneself in December.

Meet my Pfaff 2027. Purchased from Joan MacNeill in Springdale, who also kindly repaired by Bernina 130 (more on that in another entry).  I’ve been running through what I typically do work-wise with a  machine and have found that this little workhorse does it at least as well as  Bernie. It handles metallic and sliver threads beautifully (once you remember the trick about loosening the bobbin screw a tad), quilts  like a dream and the dual-feed system (like a built-in walking foot) is actually even more useful than I thought.

Strangely enough, the plastic bobbins are the hardest part to get used to, although I have heard it said that they’re better for a machine than a metal bobbin, as the bobbin will not wear at the machine in the same way if made of plastic. I like the push-in bobbin as I find it gives me better stitch tension than the drop in variety, especially given the fact that I work with a myriad of threads.

Here’s the machine and what came with it:

It also does some 41 stitches, most of which I admit freely that I’ll never use. There are a few that look  promising, though. Might have to fiddle with them a bit and see. 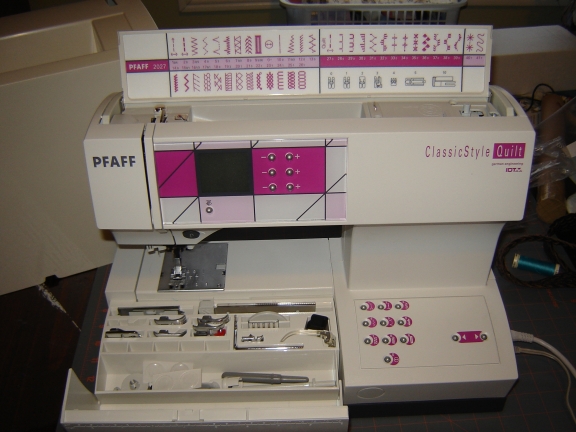 What it does do extraordinarily well is sew evenly through many various layers of fabric, stabiliser, fusible and batting. It had not trouble puncturing thin plastic for me, either, and  could sew at almost full-speed using metallic thread without snapping.

The electronic interface is fairly easy to use and was one of the deciding factors for me. I knew I wanted a Pfaff and that I liked how the brand handled as a whole, but I wasn’t keen on the dials and knobs of a mechanical machine, already being used to an electronic interface with the Bernina. Frankly, the dials were driving me nuts. I also like being able to precisely replicate settings for certain tasks and the buttons are easier on my poor little memory than dials.

The foot pedal is tinsy, but extremely sensitive. It’s lightweight, too. The size and weight mean that it definitely needs the non-skid mat or piece of carpet or something underneath, as it’s easy to send it skittering with an inadvertent swing of the foot.

It comes with a bunch of different feet, including a free-motion foot and a 1/4″ foot. I’ve never actually used a 1/4″ foot in 13 years of quilting, so it should be a novel experience.

All-in-all, I am even happier with the performance of this machine than I expected to be and am also extraordinarily happy with the Pfaff service people in this area (Joan MacNeill in Springdale and Marie MacDonald in St. John’s). They not only know their stuff, but are non-pushy and helpful to the Nth degree.

Which is definitively more than I can say for the one authorised Bernina service dealer in town, who not only did not fix my machine entirely, but sent it home with a problem it didn’t have when it went in. A second opinion revealed that the screws on the take-up lever had not been tightened properly, making it impossible to align the needle shank (or anything, for that matter). This repair person tried to convince me that I had been the one responsible for the needle being out of alignment, that I had abused the machine somehow by over-tightening the needle screw (something I never do) and that new parts and more service were necessary ($$$). Remind me to write a post on danger signs and dealer warnings to watch for when having your machine serviced. If you want to know who to avoid in machine servicing in St. John’s, let me know.