Sometimes when you start out on a journey, you end up precisely where you expected to be, via the route planned, and what you encounter is more or less what you expected to find. The scenery is what you had researched, the people are what you were hoping (or at least, expecting) to find, and it’s all very comfortable in a warm macaroni-and-cheese kind of way.

This trip didn’t go that way.

At the end of April of 2013, John and I set out to make some rather profound changes in our lives. We were living with fairly high levels of stress and not taking care of ourselves physically or mentally with the consistency necessary to combat that stress. Our health was slipping drastically and I was worried, both about my own health and about John’s constant string of injuries and his ambient stress levels.

There was a long discussion and a pretty interesting debate over the course of a couple of weeks that more or less ended with me laying down the phrase, “Well we have to do SOMETHING. And I think we need some help here.” So I sniffed around for a gym and a personal trainer and John agreed to at least give it a try. A friend recommended that we check out MAX-Athletics and another friend more or less insisted that we ask for Nick Roberts. John shook his head a little in skepticism (as we had both heard horror stories about personal trainers and knew next to nothing about Nick), resigned himself to six weeks of training, and signed the papers.

And he loved it. He discovered that having someone programme his workouts, guide him through them safely and give him feedback on what he was working towards and accomplishing was EXACTLY what he needed to work steadily on resolving his injury issues and improving his fitness. After six weeks, he decided that the consistency of training was translating into consistency in other areas of his life and he liked the overall effect. His injuries were steadily resolving and Nick’s diligence of programming, scrupulous attention to technique, and highly motivating personality meant that he didn’t worry about committing to an exercise and pushing himself in training. It was working beyond all expectations and continues to give him the stability and strength he needs to pursue distance running as well as the stress-coping mechanisms with which to run a successful law practice.

I was starting from a different point, weighing about 205lbs and being drastically out of shape. My goals initially were to basically lose the fat (I was around 49% bodyfat), get myself in decent shape and resume distance running, focussing on the shorter distances like 5-10k.

That didn’t go precisely as planned. A year later, I have ended up somewhere…. else.

I honestly wasn’t that sure about the training in the first weeks. I found it difficult to trust someone else’s judgement about what I could do and was overly afraid of looking like an idiot (which I did and do, on many occasions. Don’t expect this to change any time soon.).

Then two important things happened in my head.

Firstly, I decided that I didn’t care what Nick or anyone else in the gym thought of me aesthetically or personality-wise, but I was bloody determined that they were going to respect my efforts. They didn’t have to like me, but I was damned if they weren’t going to respect me. And secondly, I decided that the preconception that I had of what I wanted clearly wasn’t working and I needed to find something else.

I remember precisely the moment that I let go of my map and let the trip take its own turns. I was doing TRX rows, hanging from those silly straps and thinking (and possibly hoping) that my arms would detach at any moment and Nick said, as Nick always says, “Okay, just two more.” I thought, “Dude, you’re crazy. Clearly. There’s no goddamn way…. Okay, fuck it. Two more it is.” And at that very point I think I turned some sort of corner towards something very new. And the next eleven months of the journey got the whole hell of a lot more interesting.

I rediscovered that I love picking up heavy things and admitted to myself that I don’t enjoy long-distance running as much as speed and power.

I relearned exactly how much I love that moment when it’s just you and something incredible difficult and it takes every single ounce of character that you can muster to even attempt the impossible.

I found that magic spot in my mind that can change the impossible to the conquerable just by flicking that switch and deciding it *will* happen.

I also discovered that I love feeling powerful, both over the weights in front of me, but also over my own life.

I have learned that the joys and exhilarations of triumph, both in your athletic endeavours and in daily life are worth any amount off suffering and that the lows are as transient as the highs, but every bit as character-building.

I have discovered that being honest with yourself does not mean being cruel or unreasonable with yourself and affirmed that it is possible to love other people fully while neither truly understanding them nor always agreeing with them.

I have learned to enjoy food and see it for what it is – taste and nutrition in a splendidly enjoyable and beneficial package. I have taught my daughter to see it the same way.

I have learned that numbers don’t validate a person and that leading a meaningful life means more than being able to see your abs (however cool that may be). Weight and body composition are tools and success comes from *using* tools to your advantage, not being enslaved by them.

I have discovered that positive attitude and heart will take you further into joy than you ever imagined possible, but that you have to surrender yourself to them and pass through pain and failure, both of which are inevitable. And that it’s worth it.

I’ve come to terms with failure and her lessons, and find them useful rather than terrifying or humiliating now. While success is the reward for all the effort, you only find it by risking and experiencing repeated failure. Failure isn’t final, success isn’t permanent, and quitting is always an option (but tastes horrible, even with wine) that needs to be regularly overcome for any commitment to be real.

Through some very hard (and consistent) work, some very deep soul-searching and an awful lot of picking myself up, dusting myself off, and trying again, I have changed substantially and am not the person I expected to ever be. 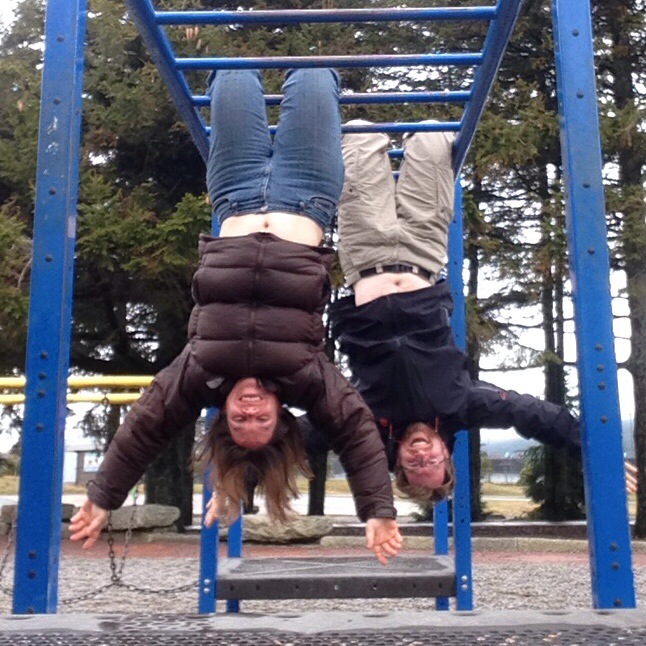 Which is ironic, because I am also less.

A year later, DEXA and body comp info reveals that my physiology has changed. I went from 49% body fat to just under 25% (that’s a difference of around 65lbs of fat). My lean body mass has gone from 104.5lbs to 120lbs, so I’ve put on solid muscle. My bloodwork has improved so substantially that I don’t even have words for it other than to say that my doctor was in disbelief. My knees don’t hurt. I can move heavy things (a lot), run very fast, play with my kid like a child and do things that are fun like climb monkey bars and trees with my husband.

But that’s just my body. I have changed my entire approach to life, food, fitness, people, and myself. And my capacity for joy has increased exponentially.

An awful lot of this was learned in those dark corners of life, in the times when you crawl into the shower (yes, I have crawled across the change room), exhausted, and let the tears run down your cheeks and wonder what the hell you’re doing this to yourself for.

Strength was occasionally forged in those morning workouts where I finished a set of sprints that utterly sucked beyond all reason and decided then and there to take up pinochle and drinking before noon. Or in those late-night chats with John in which we shared hopes and dreams that were new and fragile enough to only be discussed in the enveloping dark, cocooned in bed.

Other lessons were learned while standing over the barbell, trying and finding enough strength to make one last solid pull, or in the triumphant moment when you suddenly realize that you can confidently wear a bikini in public and are happy with how you look and don’t give a fuck if your body doesn’t meet some strange and amorphous “standard”.

But the sum total of it is this: my life is now happy, fulfilled, focussed and successful. My husband is healthy, happy and fit to run his first marathon. My kid has better parents and much better role models.

And for this I owe a huge thank you and virtual hug to Nick. What you have taught me in the past year (whether you meant to or not) goes above and beyond what I expected in a personal trainer and a coach, has changed my life utterly, and I honestly don’t know how that could ever be repaid.

Game for another year?

(And yes, Nick Roberts is THAT good. Highly professional, exceptionally motivational, diligent, very well-trained and an all-round excellent coach. When one of the guys at the gym found out that we came upon him almost by chance, we were advised that if our luck was that good, we really ought to start buying lottery tickets. We decided to put our money towards training, instead. Nick was a better bet.)