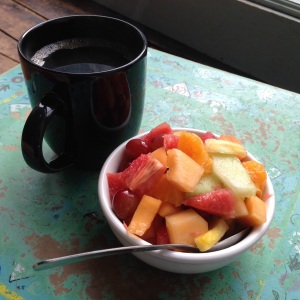 I was sitting in the window seat at Rocket Bakery the other morning, drinking a very nice cup of coffee, revising a training programme, and generally getting into the day when a woman stopped, transfixed, in the beam of sunlight that poured through the bay window.

“This window seat…. it’s just like one I found in a coffee shop in Dublin!” she exclaimed. “I used to sit there and drink coffee and read. Except the one there was filled with books. It was one of those places that has ‘Take a Book, Leave a Book’. You know the sort?”

I did. In fact, I told her, just out side the door of this bakery there is such a box, a public library built on the honour system.

We talked about books, reading, the benefits of window seats bathed in sunshine, and the importance of travel. She had fiery red hair, looked to be in her late fifties and just speaking with her was enough to split my face into an even bigger smile.

“But you know what drives me crazy?” she asked.

By now I was willing to play along with pretty much any conversation for the entertainment value; this woman intrigued me. When you meet a “kindred spirit”, as Anne Shirley taught us, you recognize them instantly and she was someone I could have spent hours talking with, without knowing her name.

“What drives you crazy?”

“Sad people. I have to fix that when I meet them. There was a man I met the other day. I saw him walking towards me in a park. He looked bitter and angry and unhappy. So I walked up to him and do you know what I did?”

I didn’t. But I sure wanted to.

“What happened?” I wanted to know.

She thought for a second. “Well, you know what? People won’t listen when you want to help them, but most everyone will take a bet or want to prove you wrong. So when he agreed, I put my hand in my pocket and took out one of those hard rubber balls you find in the Dollar Store. You know the ones. They bounce everywhere.”

Yes, I knew the sort. Like the ones kids play with.

“Those exactly!” she exclaimed. “I told him to hold out his hand and I wrapped his fingers around the ball. Then I told him to think about whatever was making him mad, sad, hurt, or bitter and to put all of that into the ball and to THROW that ball as hard as he could. He thought for a few seconds, looked at me like I was a bit crazy, closed his eyes, thought again and then threw that ball with more force than I figured he’d put into it.”

There was a brief pause as she thought for a second and I waited, wondering how this would play out.

“The ball flew through the air, hit the only tree within 100m, whacked the trunk with a thud and flew back at us. Hit him square in the forehead. Then he sat down on the grass and laughed and laughed and laughed. After a minute he stood up, shook my hand, and took out his wallet. ‘I don’t want your money,’ I told him. ‘I wanted to see you smile.'”

And she laughed one of those laughs you hear from people who are genuinely happy.

I reached out a hand, “Hi, my name is Vicky and you just made my day.”

“Suzanne,” she replied. “I’ll look for you again next time I’m here.”