I’m not sure quite where to start, so I’ll begin at the middle, jump back to the beginning and hope to find the end in the years ahead.

I found out today that a friend died yesterday. I wouldn’t say that we thought of each other as extremely close friends; more people who had many things in common and understood each other on certain levels; people for whom conversations were easy and important when they happened, but not always frequent. But she was the sort that knew exactly how to be a good friend and, like the songs always tell us, you don’t know what you’ve got until it’s gone. Yesterday the world lost someone beautiful and I lost one of the bravest inspirations I’ve known.

I can’t remember not knowing Kelly. I think she was always there in some capacity from when I first became associated with craftspeople as a child. She was unflaggingly positive and helpful; if you were doing a project, Kelly was enthusiastic and generally wanted to contribute in some way. If you needed a sheet of copper for a school craft project, Kelly had it. Want to know how to make an extremely elaborate cake or gourmet meal? Kelly was sure not only to have the recipes, but detailed instructions to keep you on track. If you were starting a garden, Kelly had plants and enthusiasm and more gardening knowledge than most professionals and she was generous in every way.

But it wasn’t until I started powerlifting and training with weights that I received her most important gift and it’s one I’m hanging onto.

When we train, we put ourselves through a fair amount of discomfort. I’ll even say that we drive ourselves to and through pain to achieve our goals. It’s part of the process and something with which every lifter comes to grips (or doesn’t) and reaps the benefits of (or fails). Most of us find inspiration of some sort to pull ourselves through. One of my greatest sources of inspiration over the last couple of years has been Kelly Mollins.

Kelly lived with chronic pain all the time. We talked about it sometimes, not often, mind you, as pain, if you’re in it, isn’t what you want to be focussed on. She woke with pain, went to sleep with pain, and had tried every mechanism that the world has invented to tolerate it. Through all of this, she laughed, looked forward to life, saw the good in others, and created a stunningly beautiful garden. She rarely complained, although I know that it brought her to her knees at times, she just moved forward with whatever grace she could muster and lived the life she was handed with strength, courage, and, well, I was going to say dignity, but I think “joy” or “fun” are better choices here. Kelly had a great sense of humour and I think she would have eschewed dignity for a good laugh over a glass of wine and a meal.

When training hurts, when my legs have ached so much that sleep wouldn’t come and I lie awake at night wondering what I’m doing to myself, when I’ve been so dog-tired and sore that putting myself under that bar one more time makes me feel like crying, I’ve often thought of Kelly. You see, I have a choice to push myself to this point and I can escape the pain. Pain and I have hung around together enough that I feel a kinship with it, but it’s also something that I know that I could, at any time, choose to bid adieu and leave. Watching Kelly proceed along a path and still see good in the world and bring beauty into being, a road that would have decimated most people, made me realize that if she could be that strong every damned day, I could too, on a lesser level. If she could tolerate discomfort and pain 24/7, then I could bloody well man-up and take it for a few hours a day, be grateful for having that opportunity, and embrace it. I told her once that she’s one of the strongest women I have ever met. I don’t think she quite believed me, but I’m glad now that I said it because it’s true.

When a person leaves us, they leave a shadow of themselves indelibly imprinted on the people they’ve touched. People like Kelly, who show improbable strength and joy, touch so many lives in meaningful ways that they are never truly gone. Every time I step up to the bar, a little bit of Kelly’s bravery comes with me and I wish I had told her every day what that means to me.

Thank you, Kelly. I will remember your stunningly beautiful garden, eccentric and loveable cats, beautiful pottery creations, fantastic wine and food, and extraordinary courage. I will attempt to pass along a little of your strength and bravery as best I can and am grateful for the gift that you didn’t know you were giving.

When the lilies bloom this year, I’ll be thinking of you. 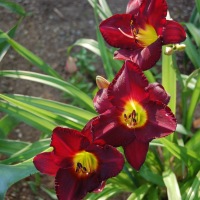